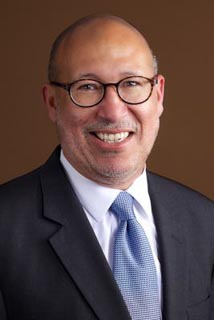 Associate Professor Thomas P. Perkins, Jr., joined the inaugural faculty of the UNT Dallas College of Law after eight years of service as the Dallas City Attorney. Professor Perkins will teach in the areas of legislation, civil procedure, negotiation, and problem-solving.

Perkins obtained his B.A. from Harvard University and his J.D. from Loyola University School of Law. He started his legal career with the Federal Trade Commission, and then moved into private practice, engaging in public finance law, commercial and insurance litigation, and trial and appellate work.

In 1992, Perkins was appointed Division Chief of the Antitrust and Consumer Protection Division, Office of the Attorney General of the State of Texas. As Division Chief for five years, he had primary responsibility for enforcement of the State’s consumer protection and antitrust laws; this also entailed supervision of staff attorneys in regional offices across the State of Texas.

In his position as Dallas City Attorney, Perkins was the chief legal officer for the City, and supervised approximately 100 attorneys in the Litigation Division and the General Counsel Division. His responsibilities included advising the City Council, council members, and all city departments. In overseeing the work of the Litigation Division, his responsibilities included litigation relating to employment, personal injury, zoning, environmental, and class actions. The General Counsel division, which he also oversaw, advised all city departments (including boards and commissions) and drafted all procurement contracts, ordinances, and opinions. As City Attorney, Perkins also managed outside counsel and the City’s risk fund, and managed all Municipal Court prosecutions, including the Office’s nationally recognized Community Prosecution team and Community Courts.

In 2010, the Dallas Business Journal named him as the “Best Corporate Counsel” with a staff of 11 or more.

Perkins’ service to the legal and civic community includes serving as Council Member of the State Bar of Texas’ Antitrust and Business Litigation Section, membership on the Court Advisory Committee for the Northern District of Texas, and membership on the Boards of Texas Appleseed, C.C. Young Retirement Center, and St. Mark’s School of Texas.