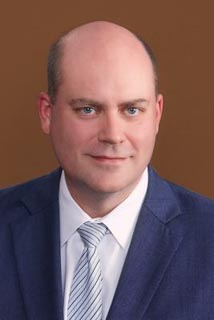 Associate Professor Eric Porterfield joined the inaugural faculty of UNT Dallas College of Law in June 2014, after serving as a Visiting Assistant Professor of Law at Texas Tech University School of Law, where he taught Legal Writing and advanced classes in the areas of Civil Procedure and Evidence. Professor Porterfield teaches Civil Procedure, Evidence, and upper division procedural courses.

In 2017, Professor Porterfield co-authored and published Civil Procedure in Focus (with Professor Jeremy Counseller), a Federal Civil Procedure casebook that provides students accessible explanatory text and opportunities to apply the law to multiple sets of facts in every chapter.

In 2001, Professor Porterfield earned his B.A. from the University of Texas at Austin with highest honors with a double major of Government and German, and was inducted into Phi Beta Kappa and the National Golden Key Honor Society. In 2004, Professor Porterfield graduated as the Valedictorian of his law school class at Baylor Law School, earning his J.D. degree summa cum laude. He earned the highest score in the class in many of his first year classes, including Contracts, Civil Procedure, Criminal Law, and Torts. He also served as Senior Executive Editor of the Baylor Law Review, making initial publication decisions, and as Managing Editor of the 2004 edition of Texas Practice, Baylor’s inaugural special issue focusing on Texas evidence and procedure.

Also while at Baylor, Professor Porterfield competed successfully in several advocacy competitions. His team won the inaugural 2003 National Association of Criminal Defense Lawyers Mock Trial Tournament and he was named the Best Oral Advocate of the competition as his team went undefeated to claim the championship. His team also claimed the Regional Championship of the 2004 Association of Trial Lawyers of America (now AAJ) Mock Trial Competition, beating another Baylor team in the finals, and was a National semi-finalist, placing third on points overall. His brief was also named Third Best Brief of the 2002 New York Bar Association Moot Court Tournament.

After graduating from Baylor, Professor Porterfield served as a law clerk to the Honorable David C. Godbey, United States District Judge for the Northern District of Texas, Dallas Division. While a law clerk to Judge Godbey, Professor Porterfield was an assistant coach of Baylor’s National Championship Mock Trial Team in the 2005 ATLA Competition. The Texas House of Representatives issued a congratulatory Resolution describing the school’s success in the 2003, 2004, and 2005 competitions. See Texas House Resolution 2058 (May 26, 2005).

Professor Porterfield then joined Carrington Coleman, a large Dallas law firm. He defended a variety of medical and legal professionals in malpractice and administrative licensure actions, health care institutions in a variety of matters, and corporations in multi-national disputes, helping to resolve a global dispute in London involving parties from three continents. While at Carrington Coleman, he was active in pro bono work for the Dallas Volunteer Attorney Program, helping victims of domestic violence and exploited consumers. He also served on the Board of Directors of the Dallas Wind Symphony from 2006-2009.

In 2009, Professor Porterfield joined Lee Brown at the Brown Law Firm in Dallas – a firm specializing in complex automotive product defect cases. He represented catastrophically injured consumers in these complex cases against car manufacturers and automotive component suppliers from around the world. Professor Porterfield has tried several multi-week product liability cases and has litigated these cases in federal and state courts across the country, from Hawaii to New York, at all stages, from pretrial through trial and appeals, including briefing to intermediate courts of appeals and the Texas Supreme Court.

In 2012, Professor Porterfield left the Brown Law Firm to pursue an LL.M. degree from Harvard Law School. While at Harvard, he researched and specialized in international civil litigation and published his first article with the Temple Law Review, entitled “Too Much Process, Not Enough Service: International Service of Process Under the Hague Service Convention,” a critique of the treaty governing international service of process, including suggestions for reform. He graduated from Harvard Law School in 2013 and his LL.M. Thesis, which earned Honors marks, focuses on reforming personal jurisdiction and judgment enforcement rules, including a critique of the Hague Judgments Convention. A revised and expanded version of this thesis was published in the Duke Journal of Comparative and International Law, entitled “A Domestic Proposal to Revive the Hague Judgments Convention: How to Stop Worrying about Streams, Trickles, Asymmetry, and a Lack of Reciprocity” in 2015. He is a frequent author and presenter on continuing education materials from legal writing to procedural rules and continues to research and write in the areas of Civil Procedure and Evidence.