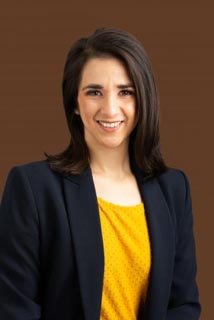 Gabriela Holguin Sotelo joined UNT Dallas College of Law as Professor of Practice effective December 1, 2019.  Prior to joining UNT Dallas College of Law, Sotelo served as an Assistant Public Defender for the Dallas County Public Defender’s Office Civil Division where she gained extensive litigation skills representing children and indigent defendants in cases where their liberty or parental rights were at stake. Sotelo previously served as Assistant Attorney General for the Office of the Attorney General’s Child Support Division where she represented the State of Texas in matters of establishment and enforcement of child support. She was recognized as Asst. Attorney General of the Year by Texas Attorney General Ken Paxton in 2015.

Sotelo has been a member of the Texas State Bar since 2009. She received a received a Juris Doctor from Texas Southern University Thurgood Marshall School of Law in 2009 and a Bachelor of Journalism from the University of Texas in 2005. She grew up on the border between Texas and Mexico and has a passion for public service and using her biligual skills to provide legal assistance to the Spanish speaking community.